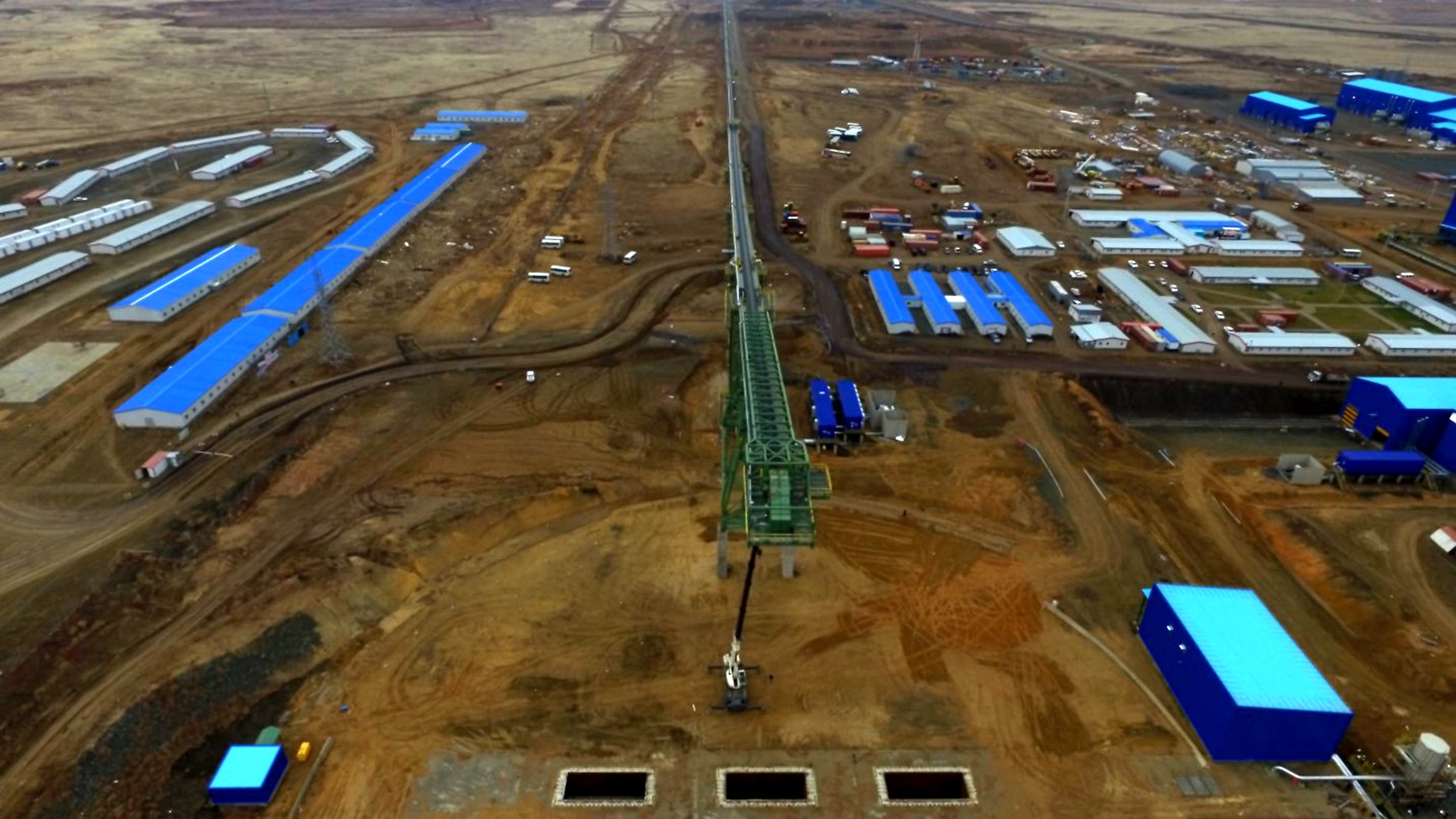 The Bozshakol mine in the Pavlodar Region of northern Kazakhstan is the largest single mine development in the Commonwealth of Independent States (CIS) region by both scope and volume of production. It is a copper-gold porphyry mine and is operated by KAZ Minerals, a high growth copper company focused on large scale, low cost open pit mining.

Bozshakol was a greenfield site, first approved in 2011 and commenced production of copper concentrate at the main sulphide concentrator in February 2016. Since April 2016 Leapfrog Geo has been used to produce the Bozshakol long term model.

Ashley Brown, Head, Resource Definition, KAZ Minerals, Bozshakol Limited (KBL), commented, “Leapfrog is allowing us to produce geological models in a fraction of the time, about a week at most. Without Leapfrog I’d estimate that to produce just the geological model would take about four months. And the ability to readily update the model is priceless.”

“The visualisations created with Leapfrog showcase what a wonderful deposit Bozshakol is. It allows the resource geologist to reveal and enhance the value in the deposit with the concomitant minimisation of risk.”

The Bozshakol mine will deliver transformational growth equivalent to more than doubling KAZ Mineral’s current production levels. The mine and concentrator will have a production life of over 40 years, including the processing of stockpiled ore for four years, the ore body also contains highly valuable by-products of gold and molybdenum.

Bozshakol was the largest greenfield development project in Kazakhstan when under construction and is among the largest newly developed copper deposits in the world. It will provide materials to China for the next few decades and will be one of the world’s biggest mines, processing around 30 million tonnes of copper per year. In pursuit of their large scale, low cost goal KAZ Minerals will implement and use the most modern technologies, the level of automation will be very high and efficiency paramount.

Leapfrog Geo has been used extensively at Bozshakol and has been used to produce the structural model, the geological model, two concentric grade domains and the oxidation model.

The local Leapfrog team trained the geological personnel in the use of Leapfrog Geo and established a geological model for the Bozshakol deposit. Once the training was over KBL site personnel ran with the model and made several additions to the workflow.

The resource modelling workflow on the site is as follows:

“A particular advantage of Leapfrog Geo is the ability of the model to virtually dynamically update with the input of additional drillholes. One simply has to check that this dynamic update makes geological sense and if not add some structural information or trends to ensure that it does. This proves to be a huge time-saver.”

With the successful implementation and use of this workflow Leapfrog Geo is now entrenched at KAZ Minerals, Bozshakol Limited as a modelling and time-saving software package.

Use in grade control and brownfields exploration

Leapfrog Geo is now also used for grade control management and brownfields exploration whereby you can set up a dummy trace of the proposed drillhole and look in three dimensions at expected intersections. This feature allows the geologists to better manage drilling.

Ashley commented, “The ability to perform all of these duties with relative ease allows the resource geologist to spend more time actually being a geologist. It is also useful for presenting to management so they can better understand the deposit.”

Leapfrog’s Regional Director Inna Popova says,“This example of the use of Leapfrog Geo at the Bozshakol mine demonstrates how Leapfrog Geo has the flexibility with data import and the speed in model generation to rapidly add value. We look forward to continuing to work with KAZ Minerals to help them further improve their geological modelling and reduce their risk exposure.”