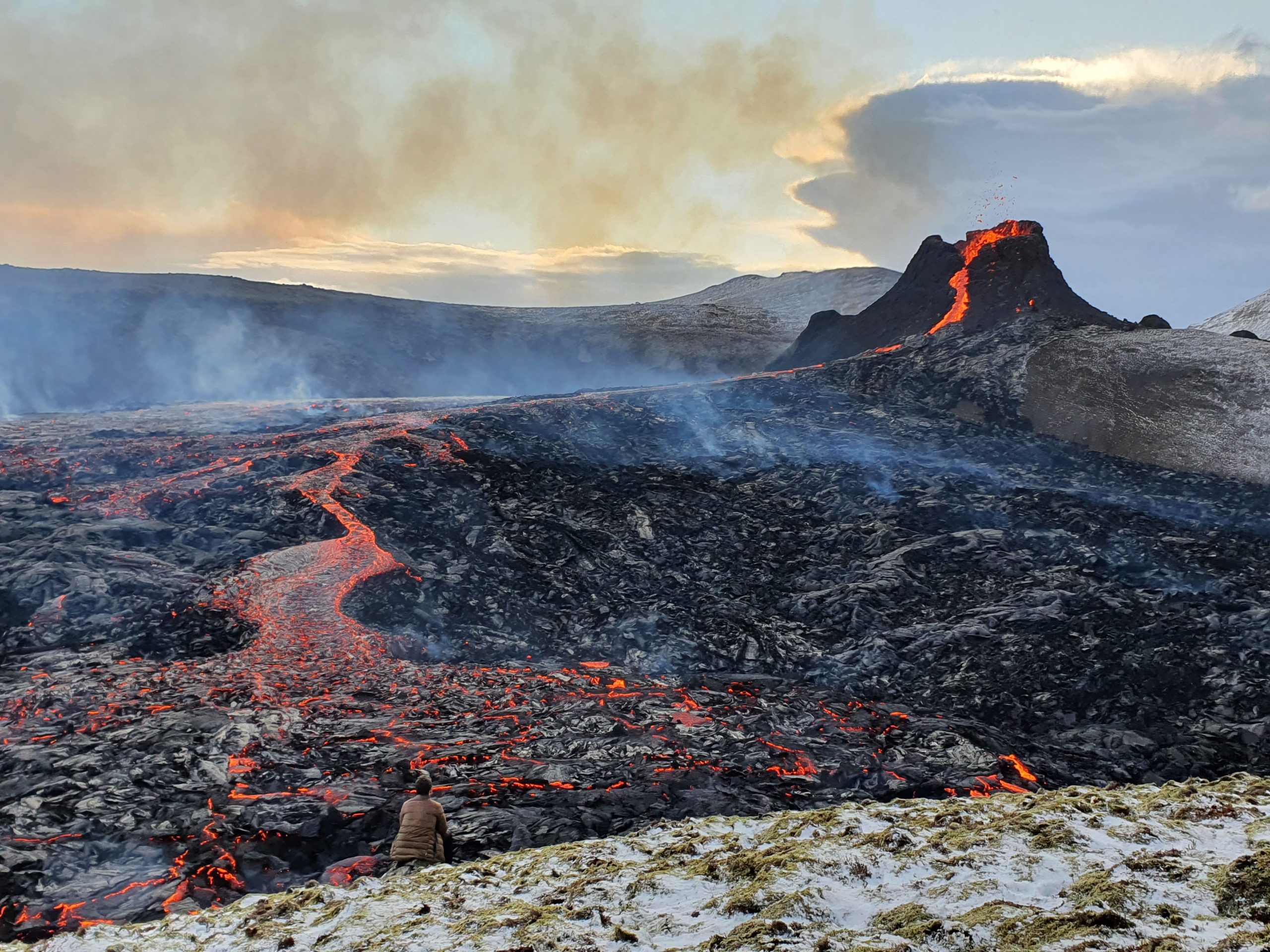 “Iceland is known as the land of fire and ice, located at the boundary of the North American and Eurasian tectonic plates,” says Bastien.

“The geology of the island country is characterised by intense volcanic activity, which has made headlines in the last decade.”

Its latest volcano has captured most of the attention, but to know where it came from Bastien had to understand the activity leading up to it.

From heated sidewalks in cities, to geothermal power, to hot springs, the world knows that Iceland is one hot country. Yet, it’s also been an inconvenience to travellers.

In 2010 at Eyjafjallajökull in the south east of Iceland, a violent eruption sent ashes into the atmosphere all over Europe, forcing air traffic to shut down for several days. The geologic context of this volcano and the fact that it was capped by a glacier created the massive eruption.

Then, in 2014 to 2015 in the center of the country, Bardarbunga erupted. This volcano had also started below a glacier but ended up becoming a less violent fissure eruption on the flank of the volcano, creating a lava field in an area called Holuhraun.

The latest eruption in 2021 is taking place in a region called the Reykjanes peninsula, the south-westernmost area of Iceland, where the famous Blue Lagoon Spa hot springs and the Keflavik International Airport are located.

The new eruption site is located approximately 80km from the country’s capital Reykjavik and can easily be accessed after a short hike from a local road. It’s been attracting researchers and tourists alike with its spectacular lava shows.

Why here, why now?

Like most of Iceland, the Reykjanes peninsula is the result of volcanism below glaciers due to the rifting of the mid-Atlantic ridge where two tectonic plates are moving apart, allowing hot rock from deep in the Earth to emerge.

The region can be divided into six main parallel volcanic systems. The current eruption is happening in the Fagradalsfjall system.

Eruptions in this area are quite rare and the last documented one was during the 8th or 9th century, before Iceland was settled, and ended in the mid 13th century.

“Only two older eruptive periods are reasonably well known from geologic studies, separated by about 800 years,” explains Bastien. “Based on this data, an eruption was likely to occur during the current century. It is important to note that eruptions in this region can last for decades or more.”

New lava usually erupts from fractures oriented N40° along the rift’s direction, and the lava flows can cover extensive areas and flow for dozens of kilometers to reach the ocean.

However, no one can tell with certainty how long this eruption will last and eruptions can go quiet during an eruptive period and then re-emerge with force.

Iceland closely monitors all tectonic activity to help ensure safety and to learn more about volcanism. As a geothermal geologist, Bastien has visited this research hub several times.

Scientists started observing an increase in seismic activity in the new eruption area in mid-February 2021.

“More than 34,000 earthquakes were recorded in the first two weeks with magnitudes as high as 5.7,” says Bastien.

The chances of an eruption were increasing by the day, as the seismic activity continued into the month of March.

“Scientists interpreted this activity as magma influx into shallower ground, which was creating a new magma chamber in the form of a dike,” Bastien explains. Earthquakes are created as magma forces its way closer to the surface, cracking open new fractures in the earth or re-opening existing ones. This forces the rocks to break and, once the surface is reached, the lava can flow fluidly along the newly opened path.

However, during the length of the eruption the force can also open new fractures farther away to accommodate a greater influx of lava or if the first opening gets blocked by new solidified lava.

Bastien used publicly available seismic data to build a 3D geological model using Leapfrog Geothermal and visualised the data as it changed over time. Could he see where the magma was heading?

Figure: earthquake location between February 24th and March 20th 2021, sized by magnitude and colored by date/time. Figure: Combined analysis of the density and average magnitude of the earthquakes between February 24th and March 20.

From the Leapfrog model, several observations can be made at specific time steps:

The region’s volcanic activity is also a great source of geothermal energy.

In the Reykjanes peninsula where the eruption is taking place, there are several geothermal power plants:

Heat from beneath the earth’s surface is used for many purposes: electricity generation, heating, bathing, greenhouses, food dehydration, and more.

What’s next for this new volcano?

“The eruption is ongoing with new eruptive fissures opening to the north of the first one, creating new lava cones and flows in the nearby valleys,” says Bastien.

“The flow rate has remained steady since the beginning of the eruption and shows no sign of slowing down.”

Figure: Evolution of the magmatic intrusion and surface lava flows based on seismicity location.

Bastien will be able to easily update his Leapfrog model as new data is available. Iceland will continue to live up to its volcanic reputation, and its geothermal plants aren’t likely to run out of steam.

Data sources used: As this eruption is very recent, the amount of data collected is still very small. Scientists are monitoring gas emissions for the public’s safety and collecting lava samples for laboratory analysis.

The most important and most complete dataset available since before the eruption are the earthquake recordings in the region and it is publicly available on the Iceland Meteorological Office website (www.skjalftalisa.vedur.is).

The earthquake data comprised of location, depth, magnitude, and time of each event, and were downloaded every week during the period of February – April before being integrated into Leapfrog for visualisation and to interpret possible trends from them.

Find out more about Leapfrog Geothermal