“It can change the world because it can demonstrate that Europe can have a responsibly sourced source of Lithium...without the associated carbon footprint.”

The birth of Cornish Lithium started with a Google search

“A friend of mine had mentioned geothermal fluids were a big problem for the historic miners in Cornwall. So I did some research. In other words, I googled it; and I found that the fluids were enriched in lithium. And this was not just in one particular area, it was widespread across a number of mines and geological structures. I thought, well this is really exciting, can we extract it? And I realised using new extraction methods, we potentially could.”
The junior exploration company is in the early stages of exploration, and they’re looking for lithium within the geothermal fluids found deep below the surface in Cornwall.
Historical mining records show that water in many of the old mines is enriched with lithium. The company sees these old records as an indication of much wider potential for lithium-bearing geothermal fluids within basement rocks, across a large area of Cornwall. Jeremy is a former mining engineer and investment banker, and he’s hoping his company can revive the once prosperous Cornish mining industry. It’s thought that mining in Cornwall started as early as the Bronze Age, and historically, the county was a significant producer of tin and copper. But after the international tin market crash in 1985, most Cornish mines were shuttered, with the last operating mine closing in 1998. But Jeremy believes his company could revitalise the mining industry in the region, especially with increasing demands for lithium batteries and the global push for renewable energy.
“This whole project is a convergence of different things,” Jeremy said. “Electric cars are stimulating the market for lithium batteries, the technology to extract lithium from fluids without using evaporation now exists, and then you’ve got the rise of digital technologies which weren’t there before.”
One of the digital technologies making this possible is our Leapfrog software, a workflow-based 3D geological modelling tool that uses implicit modelling. “Before, there simply weren’t the right digital tools available to understand the deep subsurface on a regional scale,” Jeremy said. “Leapfrog has enabled us to see in 3D, and I think that ability to see is the vital thing.”

Cornish Lithium believes it’s currently running the largest exploration program undertaken by one company in Cornwall’s history. They’re using available historical data sets, including underground mine plans, cross-sections, borehole logs and academic papers, to create a 3D model in Leapfrog. For Adam Matthews, a recent graduate from the Camborne School of Mines and the 3D modeller for Cornish Lithium, this vast amount of data gives him a lot to work with. Historical mine workings in Cornwall with recorded temperature data. From the Cornwall Record Office, MRO/R103/12/2.

A section view of Cornish Lithium’s model in Leapfrog. 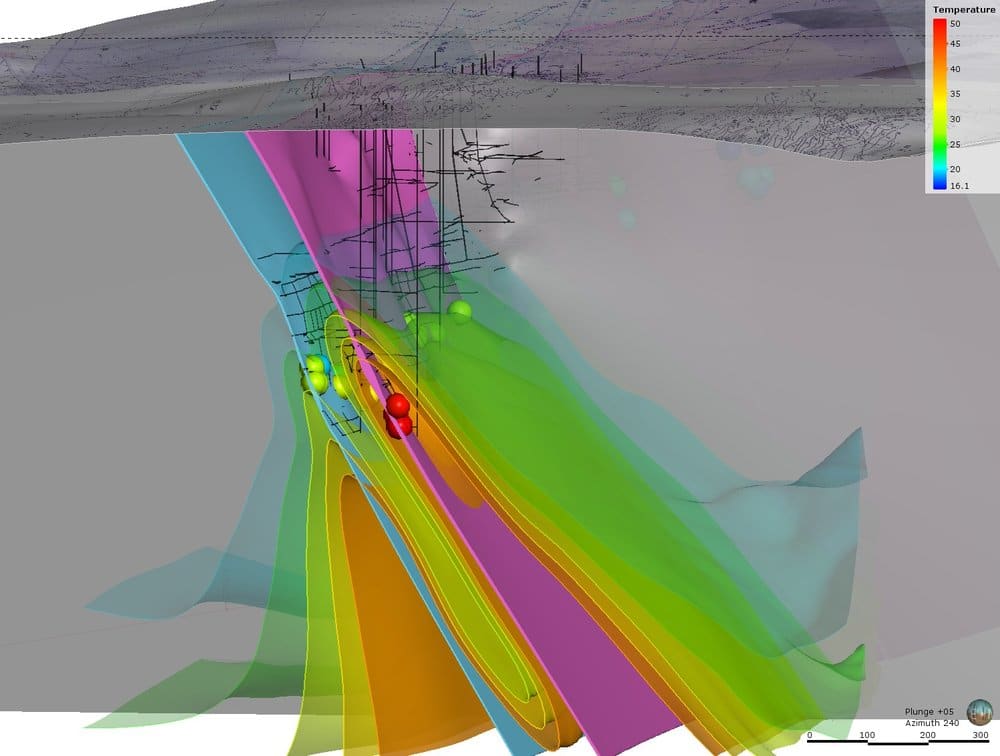 Historical temperature data modelled in Leapfrog, shown in an iso-surface map.
“What we think is happening is that the hot water at depth is being circulated up through the faults, within convection cells,” Adam said. “What we’re trying to do is use all the historic data to create a fracture model, to understand where the faulting is and how it interacts with the circulating lithium-enriched fluids.”
Using the 3D model is the only way that we can position and visualise this data and begin to interpret the location and variability of the geothermal fluids.” Adam’s been georeferencing the existing geological data to digitise the fault systems. He then uses polylines to outline the positioning of geological structures, which Leapfrog interpolates into surfaces. Cornish Lithium has validated the accuracy of the data by correlating it to externally produced 3D mine maps of the levels and shafts (provided in some cases by Cornish mining engineer and researcher Dr. Keith Russ).
“Keith has really accurately modelled the historic mine workings. He did this for all of Cornwall over a period of 30 years,” Adam said. “We’ve made our model not using his data at all. And when we’ve input his data into our model, it shows that the workings correlate to where our modelled structures are. It’s a nice way of validating the data.”
The company plans to use the 3D model to pinpoint drilling targets for future exploration programs. In the meantime, they’re further refining the model in Leapfrog by also mapping historical temperature data.

“I really thinking this is one of those opportunities you only get once in a lifetime. We are fortunate to be in the right place at the right time.”

“We collected hundreds of hot geothermal fluid temperature readings from historic literature, each with verbal descriptions for their location,” Adam said. “These are significant because hot water, relative to the wall rock temperatures, suggests it has flowed up from a greater depth than where it was observed. This illustrates that these geothermal fluids are circulating within the geological structures, suggesting they are permeable to depth.”
And since their lithium source is from hot geothermal fluids, Cornish Lithium believes there is potential to support the geothermal industry as well.
“We’re actively working with the geothermal companies in Cornwall to understand the deep subsurface, because the source of the lithium-enriched geothermal fluids is the same,” Jeremy said. “They’re just drilling deeper than us, because they require higher temperatures than we do.”
Jeremy envisions that geothermal energy production could be used to offset Cornish Lithium’s production costs while simultaneously producing lithium. He thinks it’s a unique opportunity to support multiple industries.
“I really think this is one of those opportunities you only get once in a lifetime,” he said. “We are fortunate to be in the right place at the right time.”

We enable geo-data to tell a story with software that combines in-depth analysis, 2D and 3D visualisation, and data management. Accessible on desktop and Cloud, Seequent brings together the trusted power of Leapfrog 3D, Geosoft, and GeoStudio software. Our solutions integrate with industry-leading tools and have an open API so that all data and workflows can be considered.

Build integrated Earth models
Combine all of your geo-data, bring together teams remotely, and integrate software in near real time to make the best choices for your projects.

Focus on your work, we’ll handle the data
There’s a team of expert geoscientists working alongside software architects – translating the latest science into tools that help you make vital decisions.

Customers trust our products
Because we listen, we test, we evolve. Customer and industry feedback drive each update. We invest heavily in research and development.

Connect all your data
Geo-data is your most valuable asset and we make sure it’s secure, tracked, and accessible whether you use it on desktop, Cloud, or both.

In over 100 countries, industry professionals are using Seequent technologies to tackle challenges in the geosciences – and they’re delivering powerful results.